It was planned that I would be in Delhi during the weekend of 21-22June. Then Husband dropped the bomb that he would be working full day on Saturday 21st June. Now that's wrong. What do I do in Delhi on a hot summer Saturday in June? As a blessing from the skies there landed a mail from IndiBlogger in my inbox informing about a interactive session with the team of the new Channel which was to be started from Monday. Zindagi from the family of Zee. The uniqueness of this channel - It will show some wonderful stories from across the border; from Pakistan. This meet was to be held in both Mumbai and Delhi simultaneously.Howzzat. In Delhi the venue was Taj Palace hotel in Man Singh road.

I registered myself for Delhi meet. Even though I was slightly apprehensive at first as I didn't know anyone in Delhi whereas in Mumbai many of my blogger friends would have attended. But then it reminded me of the day when I went for my first IndiBlogger meet without knowing anyone and now I have some really lovely bunch of fellow bloggers as friends.

The event started a little late. But please donot let that dampen your spirits. We were connected with the bloggers in Mumbai by a huge screen. Nihal, from IndiBlogger Delhi and Anoop from Mumbai did a wonderful job of connecting the bloggers from both the cities. There was a fun debate. The perennial debate between Delhiwale and Mumbaikars.
Q.Which city has the best public transport? ; Which city has more number of good looking men; Which city has the best weather.
Both Delhi and Mumbai came up with interesting details in support of their respective cities. All the while everyone had loads of fun. I, for one, a Mumbaikar sitting amidst Delhiwalon was having a good laugh.
Then came the creative head of Zee Zindagi TV and came along with her one of the lead actors from Pakistan Imran Abbas.   We all can surely hear the loud welcoming given to them all the way Delhi. Also joined us on the screen was Ms. Sultana Siddiqui. A very respected and well known TV producer and director. It was really wonderful to hear them talk about the life and the stories inspired by life in our neighborhood country with whom we share a bitter sweet relationship. Imran Abbas sang " Dharti sunehri" from Veer Zara which said so much of both the countries. While looking at the promos of the serials from Pakistan, one thing which I find heart warming is that we are so strikingly similar. They just look, talk , walk, wear, eat just like the way we do. There was no need of dubbing the serials because we speak the same language. 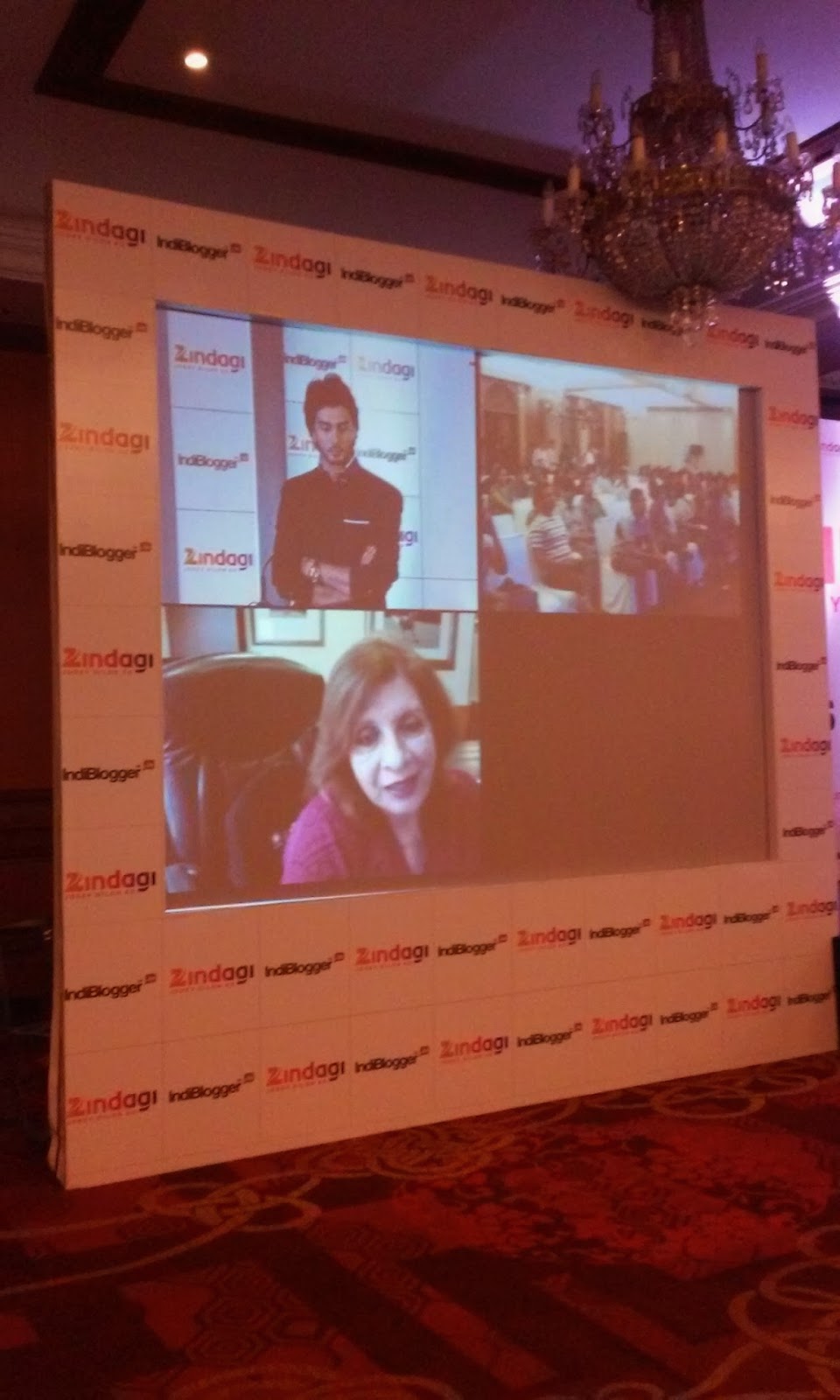 Few weeks ago I had the opportunity to watch a very wonderful little film called " Filmistaan" There the protagonist Sunny Arora who got kidnapped by terrorists by mistake and has been kept a hostage in one of the villages there says " Kaisa pata chalta ke Pakistan main hoon. Ghar, rehna, khana sab same hai" ( How would I know that I was in Pakistan. The homes, living, food everything is same)
That's what I felt when I saw the promos of the serials from across the border. Everything is same!

Zindagi comes with the message of Joday Dilon Ko - to unite the hearts.I hope Zindagi manages to bring a "Aman Ki Aasha " between the two countries and unite the hearts someday.

Another reason to watch the channel and serials : they end in 25-26 episodes. Beat that!!