A Beautiful Birthday in Bastar

It all started with a tweet! I tweeted to Chhattisgarh Tourism's official twitter handle ( @GoChhattisgarh ) requesting for an email id to enquire about Chitrakote fall. P and I had been planning to visit this place for quite some time. Mainly for 2 reasons; One : we wanted to be in a place we had not been before & Two and more important; we wanted to spend my birthday in a quiet place just being together. They replied within 10 minutes and thus the ball started rolling.


Few mails were exchanged, we zeroed upon an itinerary suggested by Chhattisgarh Tourism and we landed in Raipur on the eve of my birthday. Destination - Chitrakote Water Fall. The nearest town of Chitrakote is Jagdalpur which lies approximately 284 km from Raipur by road and from Jagdalpur another 38 km beyond is Chaitrakote. Here I must mention the warm welcome that we got from Vikash and others at the Tourist Information counter of Chhattisgarh Tourism Board at Raipur airport. We were welcomed by roses and a hot cup of coffee.Vikash then introduced us to Sushanta who was going to be our driver cum travel companion for next 3 days in Chhattisgarh.
﻿

We set off to Chirtakote via New Raipur which is the newly developed town at the outskirts of Raipur city. As we were out of city limits, the landscape changed to green paddy fields with occasional villages / small towns on both sides of the road. We made a stop at Makri Dhaba at Kanker for lunch. We could not help but notice that unlike many places around India, the highway leading to Jagdalpur from Raipur , NH 43 is still not laden with lot of roadside eateries / dhabas. Makri Dhaba served decent food but most importantly it had a clean toilet. This still continues to be an issue while travelling in India.
As you move towards Bastar, the scenery turns greener with big trees adoring both sides of the road. At times the road would be through a forest. Sushanta kept updating that those were the "disturbed" areas.We were slightly sad to see those trees marked out to be cut soon as the widening of the road was in process. The flip side of development!

By the time we reached Jalgdalpur, it was getting dark already. We made a quick stop for a cup of tea and continued towards Chitrakote. As we were getting nearer to Dandami Resort by Chitrakote falls, it was getting darker and our mobile network started playing hide & seek and after a point completely disappeared. Sushanta said only Reliance network worked there. After sometime Sushanta pointed towards a light and said " That's chitrakote fall" We rolled down the car windows. We could hear the gurgling water. He stopped the car near the water fall. I wanted to get down. But P said " Let's check in first and then we will come back." Sushanta said the lights will remain on till 9 pm. It was only 7.30 pm.


The Dandami Luxury Resort is the only option to stay at Chitrakote water fall. There we were welcomed with flower bouquets by Mr. Srivastava, senior tourist information officer and Mr. Thakur, the resort manager. All our tiredness from this long road journey disappeared by this warm welcome. They said that we were booked in Cottage no 1 and assured that we would love that. We came to our room to drop our things. The moment the lights were on and Raju, who showed us our room, turned the curtains away from the window, I and P were awestruck. We could see the fall straight from the room! We dropped our bags in the room and headed to the fall. It was a sight to behold. Chitrakote water fall was in it's full monsoon glory. We could have sat there the whole night. But the lights go off at 9 pm. So we returned to the resort.


Next day was my birthday. Both I & P woke up at 5.30am and headed to the fall. We wanted to catch the sunrise. There was no one and since the sky was cloudy, so there was no sunrise too. That did slightly disappoint us; but spending those absolute quiet morning at the Chitrakote fall just the two of us was priceless. Slowly people from nearby places started coming. First the temple priest came to have bath. Then few others. There were women and children too. I have to admit, I am used to being glared at as a woman. I have even seen male guests in 5 star hotels checking out women in the swimming pool. But there the so called " not so developed" part of the country, men & women were bathing together in the river and no one gave a damn.
Chitrakote fall is the widest water fall in India. The river Indravati at this point in Bastar, near Jagdalpur falls from a height of about 98 feet and from a wide gorge shaped like a horse shoe. During monsoon, the water fall covers the entire stretch of the mouth of the horse shoe from left to right banks. The water turns brown as the river carries slit during monsoons. But we heard that during  winter though the water fall gets smaller and less in intensity, the water is clear. There was a small temple as we climbed down near the fall. The deities were made in Dokra. 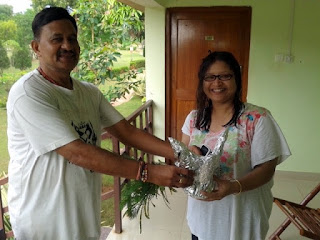 When we returned to the resort, an unexpected surprise waited. Mr. Srivastava came to wish me with a bouquet and a gift! My My. Both P and I were overwhelmed. I could not stop smiling. That was the second best thing to have happened on my birthday. The first one is that we were in Chhattisgarh, a state we always wanted to go. At the breakfast table also Mr. Thakur and all the restaurant staffs came to wish me. If morning shows the day, I was prepared for a wonderful birthday already.

After breakfast we headed to Tirathgarh water fall. This lies approx. 35 km from Jagdalpur. It is inside Kanger Valley National Park. But the park was closed because of Monsoon. Kanger area is the heart of Naxal activities. But trust us, we did not find any discomfort anywhere. It was absolutely safe. Tirathgarh water fall is actually the small tributary of Kanger river called Mugabahar falling from a height of 300 feet in steps. ﻿
﻿

Both I and P ﻿were awestruck. The small calm river which we crossed just before reaching the parking point, turns into a milky white water fall gushing down non stop. If Chitrakote fall impressed us, Tirathgarh fall sure mesmerized us. Since we were there in a moth which is officially "not season"  there were not many people. Then we realized when Mr. Saumik from Chhattisgarh tourism told us that mostly we would be the only "tourists" in these places. There is a Shiva - Parvati temple nearby. Sushanta said many people come to that temple. What I liked the best in the temple was the fact that the priest did not insist on a "Chadhawa" or offering even when P said that today was my birthday. He just chanted some mantra as we folded our hands and gave us coconut pieces as prasad. As were returning, we noticed that even though there were rows of eating places most of them did not have the chulah burning. That's because there were not many people coming. We just sat at one place which was selling chips, biscuits and cold drinks and had few cold drinks.

Jagdalpur had another surprise waiting for us. We found a restaurant named "Mayuri". Where else but in a namesake place for my birthday lunch. Regular food though, nothing very special. We had planned to be back at Chitrakote before sunset. We also wanted to stop at the Anthropological museum at Dharampura on the way from Jagdalpur to Chitrakote. This museum provides a glimpse into the history, life style, culture and the diversity of the people in this region. I would recommend a stop at this museum even for 10 minutes to understand the region well.


We reached Chitrakote well before sunset and realized that there had been a heavy downpour in the afternoon and hence the sky was still gloomy. So no Sunset either! After missing out on the Sunrise, we were really disappointed on missing the Sunset too. But that did not deter us from enjoying the beauty of the Chitrakote water fall which was now almost thunderous. As darkness set in, the sky turned gloomier too. That was another magic. People hurried to leave before the sky poured again. P & I stayed back and watched the sky turning into dark grey and then into a dark shade of blue. The water fall looked magical in that light. So what if we missed watching the water fall when the Sun rises and sets. We witnessed it in a different glory; just at the beginning of a storm.


We left only when big drops of rains started falling. We headed straight to the restaurant at Dandami Resort and asked for hot pakodas and tea. The rains lashing the windows outside and inside piping hot pakoda and tea; it was pure bliss. As we thought that the day had gone well; we were in for a surprise at dinner too. The chef, cooked a special chicken dish for us. The food at the resort is very good. We had brought sweets for all the staffs that night. Happy and contended we returned to our room. From our room one can have a lovely view of the fall. Both P & I just sat outside the verandah for sometime and looked back at the day.


It was a day well spent. We were in a place which is known for all the wrong reasons. But nature has blessed this unique state abundantly. Chhattisgarh tourism is doing a great job in promoting their state.
As for us, we will be back for sure.