Thank you Renaissance Hotel and Convention centre, Mumbai for giving me the chance to be a part of my first ever Christmas Cake mixing ceremony. I have always read about it, seen photographs and wishing how I also wanted to be a part. That wish came true today and guess what, this gave me a chance to make another wish too. 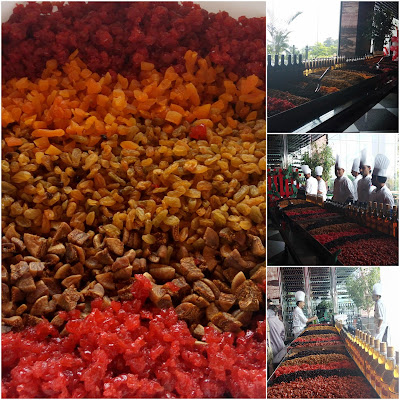 It is said that the Christmas Cake mixing ceremony dates back to 17th Century in Europe. This ceremony marked the arrival of harvest season and lots of fruits and nuts were harvested and then preserved for the next harvest season. This turned into a family get-together where everyone would join hands, literally, to soak the dry fruits and nuts in Rum, Wine and Brandy. Over the years it became of big ceremony which fall well in advance of Christmas so that the fruits totally soak in the liquor and thus when mixed in the cake, they add to the whole taste of it.

Before the ceremony actually started, we were treated to the sumptuous Italian brunch spread at Fratelli Fresh. I loved the roasted Pork leg with the apple sauce. The Ravioli and Gnocchi were phenomenal. I had 2 new desserts Crostata di Fruta and Zuccotto; and I liked the former more.

Then the bell went "ting ting" marking the beginning of Cake mixing ceremony. The guests were given chef caps, aprons and gloves before everyone put their hands into the large trays of fruits and nuts. Bottles of Rum, Wine and Brandy were poured into the fruit trays and then there was lots of laughter and giggles all around. We all joined our hands with the chefs and mixed the fruits and nuts into all those booze. These booze soaked fruits and nuts will be kept in air tight containers for 3-4 weeks. By the that time they will completely soak in the booze and be ready to add much more flavour to the final
cake.

And yes I did make a wish as I was mixing. That I would like keep as a secret for the time being.