To be honest I had never heard about this community called "Saraswat Brahmins" forget their food. It was when our friend Bakul mentioned about this place called "Simply Saraswat" that too in Borivali I was really interested. She spoke very highly of the place and that they serve Chitrapur Saraswat cuisine. But P and I hardly had time to go find it. As luck would have, few days ago as we were going somewhere we saw Simply Saraswat on the way. There the place was; next to 5 Spice at the corner of Chandravarkar Road and Eksar Road. We decided to go there while returning. 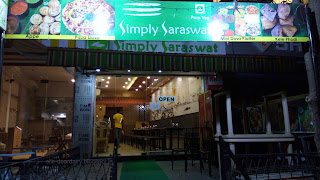 It's a small place. On the wall there is big mural of the Rath Utsav festival during which the deity is taken on a Rath / Chariot ( hand drawn) around the town / village. When we reached there was only a lady sitting in one of the tables. She was busy sipping coffee and writing on her note book. We both did not know what we should try. Even though Chitrapur Saraswat Brahmin cuisine includes non vegetarian dishes, Simply Saraswat is strictly vegetarian.

﻿ From the menu we could make out that Dosas are called Pollo and these are soft dosas not the kind of dosa that we get in regular South Indian or Udupi places. We ordered for a Mushti Pollo with Puddi Chutney and Ghee (Rs. 80) and Appe (Rs.70) to start with. Appe is described as a" Fluffy avatar of doas" in the menu. It came in the shape of small Unniyappams. The similarity ends there. It's actually a dosa,remember! It was served with sambhar and 2 chutneys. The Mushti pollo looked like an Uttapam. It was so soft and fluffy and the puddi and ghee sprinkled over added so much more to it.

We loved both. Then P asked for Rasam Ambode (Rs. 70). Button Vadas served with Rasam. After all these we thought let's have another dish from the menu and our dinner will be done.
We asked Kishore who was there serving us about his suggestion. He said Dakshin idli (Rs.90) was a very popular dish. It's idli fried in a spice mixture which, we are told, are very typically saraswat.

All the dishes that we ordered were served piping hot.The menu boasts of a variety of Pollos or dosas. This time we tasted only 2, Appe and Mushti Pollo.

The place has been featured in a column in Mid day. A paper cut was hanging on the wall. From there  I learnt that saraswat brahmins trace their origin to Kashmir. They used to live on the banks of the river Saraswati. Later they migrated to the areas near Mangalore. The food, however is so similar to South Indian dishes than up North Kashmir. Whatever it is, both P and I enjoyed our first visit to Simply Saraswat thoroughy.  We have all the plans to go back to try other items in the menu soon. 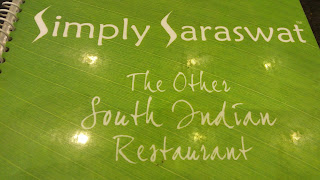