Last year both P and I went to Chhattisgarh, a state we had never been to and came back with some wonderful memories. I have written about it here. After 6 months we were going through the photographs and I came across few which are indeed more special. Not because they are some spectacular clicks; but because each of these photographs carry a story in it.

That mesmerizing Chitrakote fall. We witnessed this majestic fall in it's full glory as we had gone there while it was still raining. Yeah, the water was muddy; not clean and sparkling like the brochures. But this roaring water had it's own charm. We did not get to see Sunrise and Sunset because of the clouds. Instead we saw the water fall when a storm was approaching. It was dark, grey and that fading light cast a magical spell to the whole evening. We stayed back till it started to pour and it was an absolutely out of the world experience. 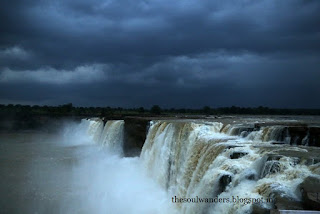 Chitrakote as a storm approached


﻿﻿﻿﻿
Actually we were in Chitrakote to celebrate my birthday. On the day we woke up at 5am hoping to catch up the sunrise. But the clouds played spoilt sport. Sitting near the water fall just 2 of us were enjoying the solitude thoroughly. Suddenly a boy comes and picks up a conversation with P. He had come as band member who was supposed to perform in some rally at the Government guest house near the resort we were staying. His name was Lakhiram and he played Banjo. We kept meeting him till on and off till the day we left Chitrakote. He just seem to come from nowhere whenever we were there. Untouched by the complexities of life, his simple dreams may come true soon. 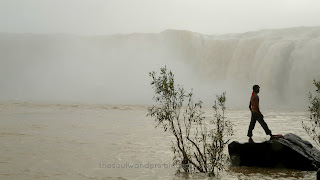 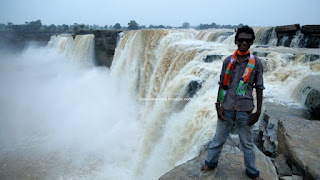 
The priest at the temple near Teerathgarh fall. Our experience at such places have not been really good. Usually at such touristy places, there is always someone trying to fleece you and when  you tell them you were there because that happen to be a special day; you can be sure he will find a way to rip you off. When P told the priest that that day was my birthday and asked him to offer a puja on our behalf; I was almost sure now the priest would come up with an elaborate puja ceremony. But to my utter surprise the priest just looked at us and chanted some mantra as we both folded our hands and gave us coconut pieces as Prasad. He did not say a word about offering this puja that puja and ask for any "chadawa" or cash offering or "fee". 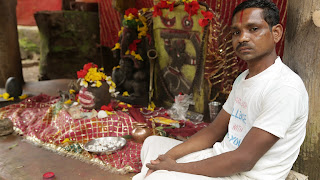 The artist whose shop we happen to visit by sheer chance. As we were leaving Chitrakote to go to Gangrel, P said let's stop near the fall for one last time. We did and there we noticed those lines of small shops selling little artefacts. We stopped at this particular shop where the guy was working on something so intently. As far as I remember, his name was Raju.Very soft spoken he showed us the pieces he has made. They were all so beautiful. We bought 2 pieces from him. Everything in the shop were made by him and the prices were so reasonable that P paid him what he asked for. The previous day we had gone to different shops in the Jagdalpur town and we knew the prices these shops charged for similar artefacts. This man made everything himself and he never asked for an exorbitant price from 2 "tourists". Do visit his shop near the Shiva temple next to Chitrakote fall. Trust me you will not regret stopping there. 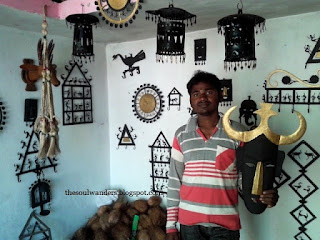 Chhattisgarh remains in the news for more wrong reasons than right. This is a beautiful state and has so much to offer from the tourism point of view. It's a state marred by disturbance and conflict. I am not capable of commenting on this. But I also come from a region which was once considered to be very disturbed and a conflict area. But life has become "normal" now in Assam. While growing up and even now a common sight in towns and villages of Assam is the sight of girls and boys going to school riding a bicycle. More so in villages and smaller towns. This very sight in Chhattisgarh made me the happiest. It was a sign, the new generation growing up values education; they want to spread their wings and may be one day bring the much needed change to their state. I hope they do and soon. 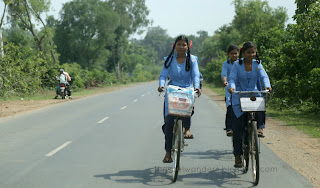