Yeah I know, such a much used and over used title for an account of a trip to Turkey. I also know what I am going to share, many across the Globe have "Been there done that". After much planning, changing, again planning we (I & P) finally landed in Turkey this year. I will share a detailed post about what how and where all in Turkey we had been to some other day. It was my first trip to Turkey and here I am going to share those moments that made us smile & made this whole trip so much more.


1. The very first one was at the Immigration counter itself in Istanbul. The officer took my passport and read my name in an "almost perfect Axomiya / Assamese pronunciation".Yes, not "Maayoori", "Myuri" "Meyuree" but "M-O-Y-U-R-E-E". (I spell my name as Mayuri). I could not stop grinning and responded with a "slightly over enthusiastic for the place" Yes. I don't know what he made out of my happiness at that moment as he stamped "Giris" meaning To enter in Turkish. And I am sure I didn't imagine the faint hint of smile in his face too. Such a welcome change from the otherwise expressionless wooden faces at such places.

2. After that another Turkish Delight was waiting for us near the airport Metro gate. I and P reached the metro gate and was trying to understand how to use to Vending machine to buy an Istanbulkart. An Istanbulkart is a must whosoever is going to stay in Istanbul for 3-4 days atleast and plans to use public transport. It is an Electronic wallet which can be used in Metro, Ferries, city buses and even in the old tram in Taksim. One card can be used for more than 1 people. However it is advisable to use 1 card for 2 people only as the charge increase in the immediate second swipe or third swipes. As we were standing there with money in our hands looking for instructions in English, a gentleman offered us to help. He entered all the details and advised us not to charge it with a high amount right away. Few seconds later the Istanbulkart was in our hands. In a place where very few locals speak or understand English, and most were tourists like us, he sure came as an angel!


3. We reached our first hotel of the trip. It was cute little hotel amidst many hotels right behind the Blue Mosque. It's actually an old house which is now converted to a hotel like many old Turkish houses in that area. Ilhan at the reception welcomed us warmly and he very kindly upgraded our room without any charges. That was totally unexpected. Boy weren't we delighted. At first we thought there may be not too many people during that time and hence we got the upgrade. But next day in breakfast, we realized the place was almost full. Still he did that even though we never asked for it.

4. We reached Cappadocia and P randomly decided to try our hands at ATV Quad biking. So Ahmet from our cave hotel called the guys at ATV Quad biking and arranged for that. They assigned us a young 20 year old "Navigator and Guide" Timrai. That young boy very patiently put up with 2 "Big" Hindistani tourists who would stop and start clicking random photographs. With his limited English , he told us that he was studying and part time he worked to earn as well. In his bike, he took both of us one by one for Cappadocia's version of dune bashing. Hats off to that kid and we wish him all the luck.

5. While walking around the Cappadocia town, we saw a café called Café Safak. The signboard read different prices for the way you ask for coffee. We stepped in and who we meet!! An old couple and a young and chirpy waiter cum cook from Afghanistan who was a fan of Sanjay Dutt! His name was Nehmatulla and when he heard we were from Mumbai, he started speaking in his language. Urduish hindi or hindiish Urdu. The son of the old couple was in Australia and Nehmatulla was the one who was running the show in Café Safak. He told us that since they couldnot pronounce his name, they named him Farhat! Even though he loved Munna bhai, he was mighty impressed with Big B because he had played an Afghan in Khuda Gawah. He dreamt of coming to Mumbai and we sincerely hope he does someday. 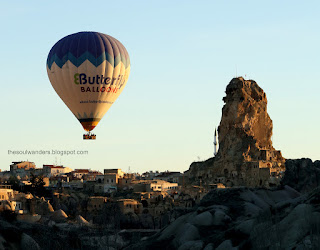 6. Our first hot air balloon ride ever and it could not have been better. All thanks to the team at Butterfly Balloons and especially our pilot Kaan Demircan. In our balloon that was the first balloon ride for each one of us and Kaan kept saying that was his first flight too! Very jovial and lively, he was the show stopper of this spectacular Balloon ride. A very senior pilot he had been doing this for 8
years now. I was cribbing to P about the charge that we paid compared to what few other Balloon companies were offering; but trust me every penny was so worth the experience. If we go back to Cappadocia and plan for a Balloon ride again, we would surely opt for a flight by Kaan and Butterfly Balloons any day.

7. In Pammukkale we had opted for a day tour by Tours4Turkey. We were a part of a small group of about 12 people. From different countries, this motely group had 3 solo travelers and 2 of them were women. I loved meeting each one of them. There were 4 ladies from Malaysia who were on the last leg of their yearly "girly trip". Leaving children and husbands behind, these ladies every year make plan and travel to different countries for 15-20 days. They all were working and decided to do this since last 4 years. I was surely impressed. I wish them all the luck and may they continue this every year.


8. In Istanbul we had planned to visit The Museum of Innocence. We heard that if you carry a copy of the book, the entry is complimentary for one person. In a book shop near the underground metro at Taksim square, we asked the guy at the counter if he was aware about this. His English was limited, but he called his "director" of the shop and told him. He was not aware about that. But he asked us to wait as he checked on the website of Museum of Innocence , took out their phone number and made a call reconfirming this. Both I and P were looking at each other. That was sure unexpected. After speaking with them, he showed us the page which would be stamped at the Museum. We thanked them profusely as we left happily.


9. The Incharge at Museum of Innocence who allowed a girl even beyond the museum timings. Both I and P spent quite sometime at the Museum of Innocence and finally when we were done, it was almost the closing time. I came down and waited till P joined me. One girl was pleading the incharge to let her see it even for 15 minutes as she was leaving the next day. She admitted she was late but she pleaded to allow atleast for sometime. She was on the verge of tears as she turned to leave visibly heartbroken and disappointed. The incharge who looked quite strict relented and asked the guard to allow her in. I witnessed that moment when the girl really cried out of happiness as she thanked the incharge and paid the charges. She looked at me with teary eyes and a smiling face. I was smiling in her happiness and thanked the museum incharge too. Just like that.

10. The Cobbler at Kabatash who was so grateful to P for showing him his shoe brush which he had accidentally dropped that he offered him to clean P's shoes right then and there. We protested but he did not listen and P allowed him to just brush lightly his both shoes. That moment of instant gratitude by him sure made us smile widely.

11. The driver of the old tram in Taksim, Istiklal street who allowed P to ride for free. It so happened that we got into the tram at Taksim Square and swiped the Istanbulkart. One amount was charged and for the second swipe there were not enough amount left. We offered him cash. The driver said that he was not authorized to take cash and pointed to the vending machine to recharge the card. I was fumbling in my bag looking for paper currency of 10 or 5 TL. The vending machines accepted paper currencies only. The driver had stopped that tram for us and it was getting full. So P told me to go and get down at our stop and wait for him as he would take the next tram. As P started to get down, the driver stopped him and asked him to go in. We were looking at each other as we could not believe what he just did. 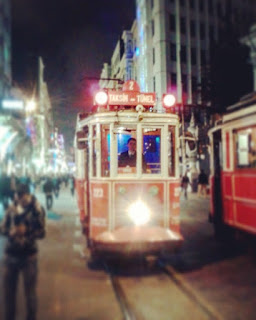 I would term these moments as Turkish Delights as in an alien country such moments added so much to our whole experience. Of course there were tourist traps in Istanbul, specially at Grand Bazaar and Spice Market. But when we talk about our first trip to Turkey, we want everyone to know this too.
Now let me quickly add one more : A random lady complemented me about my "small but bright eyes" and that made me smile the widest.