The train U P Sampark Kranti from Delhi pulled into the Khajuraho railway station by 7.30am, about  an hour late from it's  scheduled time. P and I got down and as expected someone already asked " Auto Chahiye? 100 Rs. lagenge dropping ki liye" ( do you need an auto? Rs. 100 to drop at the market." We stepped out of the station only to be hounded by more men asking the same thing. We chose a random auto and sat.
Once out of the small station, it is a long straight road till the main area where the Western Group of temples are located. About 7 kms.  We crossed the Airport and our hotel Ramada on the way. P and I had already decided that we would do a recce sort of a walk around these temples on the day we arrive. Then we would decide what to do and how.

August is still " not the season". There were sporadic rains too. But that had made the whole temple premise lush green. As we crossed the security gates and entered the garden area, it was love at first sight for us. We were impressed with the way the whole premise was maintained; even during this " off period".

We started with the Chitragupta temple and then walked around the Kandariya Mahadev and Devi Jagdamba Temples. There were very hardly about  5 - 6 tourists inside and we were the only Indians. P and I already knew that we would need a guided tour for sure to learn more about these exquisite structures. Sometimes rather than reading or googling, the magic that a local guide can weave with his words makes the place more fascinating. We spent about an hour and came out to have breakfast right in front of these monuments; at Raja Cafe. This one features in almost all the travel guides and you cannot miss this. Sitting in their rooftop area under a huge neem tree overlooking the temples, we enjoyed a sumptuous English breakfast.
As we came out to get an auto to our hotel finally by 11.00am ; we found the same Auto driver, Dipak, who took us from station. This time we asked him about his charges to show us around. Dipak brought out a whole rate chart. Whenever I and P travel somewhere like this on weekend breaks, we completely take things slow. We do everything in our own pace the way we like and that not necessarily mean going everywhere "recommended". Both P and I could not sleep well in the train. So we  planned to take some rest before heading out. We asked him to come pick us from the hotel by 4 pm and show us the Eastern group and Southern group of temples.

Dipak came exactly at 4pm. The weather was gloomy with an  overcast sky. He took us to Chaturbhuj Temple first.There were the guard, 2 women cutting the grass around the temple and 2 tourists besides us. This temple is dedicated to Lord Vishnu and this is the only temple, among all Khajuraho group of temples, that do not have a single erotic sculpture. From there we went to the Duladeo temple dedicated to Lord Shiva. Again here except for the security guard, we were the only visitors. This temple is located just next to Khodar river. But we were told that this year it still had not rained properly. Hence there was less water in the river. The overcast was growing stronger by then and we knew it would rain any moment. P and I were really keen on the Sound and Light show at the Western group. But weather was sure to play a spoilsport.


The Jain temples are in the Eastern part of Khajuraho. By the time we reached the Jain temples, the sky opened up. It was pouring heavily. We sat inside the temple premises till the time the rain stopped. After about 20 minutes the rain got lighter and we continued our "sight seeing"to the Vamana temple. This temple dedicated to the Vaman incarnation of Lord Vishnu. Again we were the only ones along with the security guard. Seeing our interest, he started describing the sculptures on the walls. There is a sculpture of Varaha another of Lord Vishnu's incarnation. It was already getting dark and was the time to officially close the gates. So we left hoping against hope the Sound and Light show will be on for the evening. But alas! It was just not our evening. We sat at Raja Cafe and munched something before heading back to our hotel.

Next day our train was only at 6.20pm and we were hoping for a late check out. But the hotel was completely full on Saturday because of some conference and we had to change our plan a bit. We had a leisurely breakfast and packed all our stuff and left for the Western group of temples by 11am. This time we wanted a detailed tour with a guide. We met Mr. Narendra Jain near the gates and fixed on a charge of Rs. 800 for a detailed tour of the Western group of temples. Mr. Jain kept his word and showed us around thoroughly. He said that the erotic sculptures make for only 3% in the whole lot of sculptures. That's strange considering how Khajuraho is known for the erotica mainly. The walls of the main temples Kandariya Mahadev, Lakshmana temple , Devi Jagadamba temple etc are adorned with exquisite sculptures depicting regular life during those days and of course the very famous erotic sculptures. There is a huge Varaha statue in a small temple in front of the main and most intricate temple of them all - Lakshmana temple. The statue is made of stone and there are some intricate sculptures cut in the whole body. That was surely one impressive sculpture.

The walls of the temples and with the description by Mr. Jain, it dawned upon us that those days women had such a strong role in the society. They were educated, strong,into sports, not afraid of their carnal desires. There were many sculptures of women with a scorpion over their thighs and in Mr. Jain's words " Scorpion or bichchu is the symbol of sexual desire. Remember the song "Daiya re Daiya re Chadh gaya paapi bichchua"." Suddenly the song from "Madhumati" had a whole new meaning for us. P and I were most amused. After a complete tour, we came out thoroughly content.


Apart from the temples, one can go to nearby water falls too like Raneh and Pandav. We thought of going to Raneh; but then we were so overwhelmed by what we just learnt that we wanted to sit and enjoy lunch rather than again going somewhere. This time we went to Indiana for lunch. Since Khajuraho is frequented by foreigners, most of the cafes offer international cuisine and really good dishes. We had pasta for lunch. Even after lunch we still had time; we had to decide between 2 museums ; Archaeological museum or the Tribal art museum. We zeroed upon the Tribal art museum. There was no one in the Tribal Art Museum. The lone person / security guard / care taker opened the doors and switched on the lights and fans when he saw us coming. It was free entry and we wanted to click some photos. But the care taker said there was a fine since the entry fee was removed. There were some interesting tribal arts were on display. we covered the exhibits in about half an hour. I strongly recommend one should visit this small museum to get a glimpse of the different tribes of Madhya Pradesh. 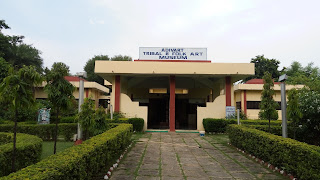 As the train pulled out of the Khajuraho station exactly at 6.20pm that evening; it carried in it 2 very impressed travelers. We enjoyed this short trip to Khajuraho, a UNESCO World heritage site. Both of us would love to be back for the famous Khajuraho Dance Festival.