Guilty Guilty - Of being THIS lazy that my last blog post was in September 2017. I know; extremely shameful. I have noone else to blame but I, me and myself for this. This year I promise to be more regular. Ok now, does that sound like a resolution? I did not intend it to be though. But this year i.e. 2018 I hope to do somethings that I always wanted to do; but never actually did.

One I already mentioned about try and being more regular with my Dear Diary. The other is, this year I will bring out the Sarees and Mekhela Chadars out of the suitcase and almirah and WEAR them. Yes, enough is enough. I have to wear them before they get "damaged" lying there or before I leave the world and cry in front of Yamraj that I could not even wear this saree or that mekhela chadar. By the way mekhela chadar is the traditional dress from Assam. It looks like a saree but this is not a saree of course. For easier understanding ; it is a two piece saree comprising of a mekhela ( the long skirt) and a chadar ( the long dupatta type cloth worn over the mekhela).

So going towards that "resolution", I have worn mekhela chadar twice in a month. Yay, am I happy or am I happy. I know it sounds stupid, but I am ecstatic. The other day I saw a small AV of Anju Maudgal Kadam one of the 2 ladies behind the massive 100 Saree Pact . This AV was made for promotion of Poorna, the film and it featured Rahul Bose. Though I knew about the 100 Saree Pact, I never had the time to really find more about it. But that AV intrigued me and my respect for the 2 ladies ; Anju Maudgal Kadam and Ally Matthan grew. They managed to create a movement and many women took the courage to bring back the sarees lying in some corner of their closets. It is very simple actually; you have to wear a saree 100 times a year. I don't think I am ready for that yet. But still a small step to bring back my sarees and mekhela chadars from oblivion.

This is a black and blue Assam Paat silk mekhela chadar. This was actually a gift by a very dear friend. That was hers but since she hardly wears mekhela chadars; she decided to give away some. She gave me 3 saying " I know you will wear them." Now that's a lot of expectation. After I think 5 months of the gift, I found an occasion to wear that. It was the Navjote of my boss's daughter. I had never been to an Navjote function before. So I had to find out from my other Parsi friends about the dress code. He suggested " Wear a saree". My colleagues also decided to go with sarees. Thus I wore that wonderful pair of mekhela chadar and rocked the dance floor too. What to do; I cannot stop whenever DJwale babu plays some oh so danceworthy numbers! 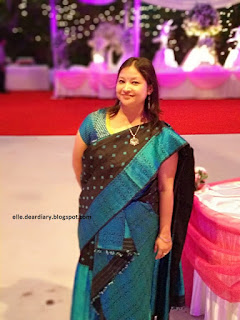 This pair of Mekhela chadar is a cotton one. This is again a gift. My sister in law gifted me this one about 8-9 months ago. What happened was I saw her wearing a very bright pair of mekhela chadar in one of the family functions. I complimented her as I really loved the mekhela chadar and she was looking very nice too. The next time I visited Assam was when my nephew was born and sister in law was at her parents house. I went there to meet them and I came back with this pair of mekhela chadar. So in Mumbai , when I received an invitation to a Malayalee wedding, I brought out this one. Even though I have one Kerala Kasavu saree, I wore this simple white and red mekhela chadar because that was my kind of tribute to the Kerala Settu Mundu. 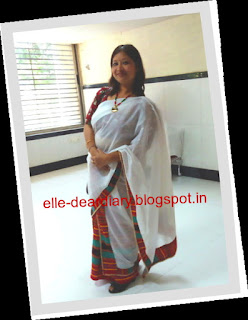 Just twice I wore traditional wear and I am writing a blogpost. Is wearing the traditional drape makes my mind think and write more? Hmmm something to ponder for sure.

Tell me what do you think.