My Big Leap in Baking - A Stromboli

All this while I was taking those baby steps in baking; but this time I gathered up the courage to take a big leap and try out Stromboli. A stromboli is a turnover sandwhich / pizza which is filled with various cheeses - as described by Wikipedia. This for someone like me was a big experiment as that also happen to be husband's birthday. He was working since 7am till 11pm. I decided to make something different , something special for dinner and tried out stromboli.

I opted for whatever was available in the kitchen and hence the filling was vegetarian.

Mix either refined flour / Maida or Whole wheat flour or equal mixture of both in the Yeast - water mixture and kneed to a smooth and soft dough. I used one cup of whole wheat flour and one cup of refined flour each. If the dough is too sticky, put some more flour till it comes to a smooth consistency. Pour 2 tea spoons of Olive oil on the dough and kneed for 2 - 3 minutes. Now cover the dough by a clean muslin cloth and let it rest for 1 and 1/2 hours in a warm and dry place in the kitchen.

Boil 2 - 3 medium sized potatoes and mash them. Cut yellow and green bell peppers into small cubes. Saute one thinly sliced onion in some oil and add the cut peppers in it. Once the vegetable cool down add the mashed potatoes, some salt, some black pepper powder and mix well.If you have paneer, that can be used too. Similarly chicken or mutton can also be used as filling.

After 1 and 1/2 hours, the dough will rise to twice the size. Put your fist into the dough to let the air out. Do this atleast 3 - 4 times. Now separate the dough into 3 medium sized balls. 2 if you like the crust thick and 3 if you prefer a thinner crust. Use a rolling pin to roll out one ball into an oval shaped roti. Maintain even thickness in this step. Spread tomato pasta sauce or mayonnaise in the middle of the oval base. Keep the sides dry. Pour the filling in the oval shape and grate a cheese cube on it. Use a butter knife or a table knife to cut the sides of the oval base. Cut diagonally about 1 inch each stripe. Now gently fold the stripes over the filling in a criss cross manner. I used a beaten egg to glue one stripe on the other. One can use milk too.
Now brush the beaten egg over the stromboli and sprinkle some white sesame. I forgot the sesames in the first one. 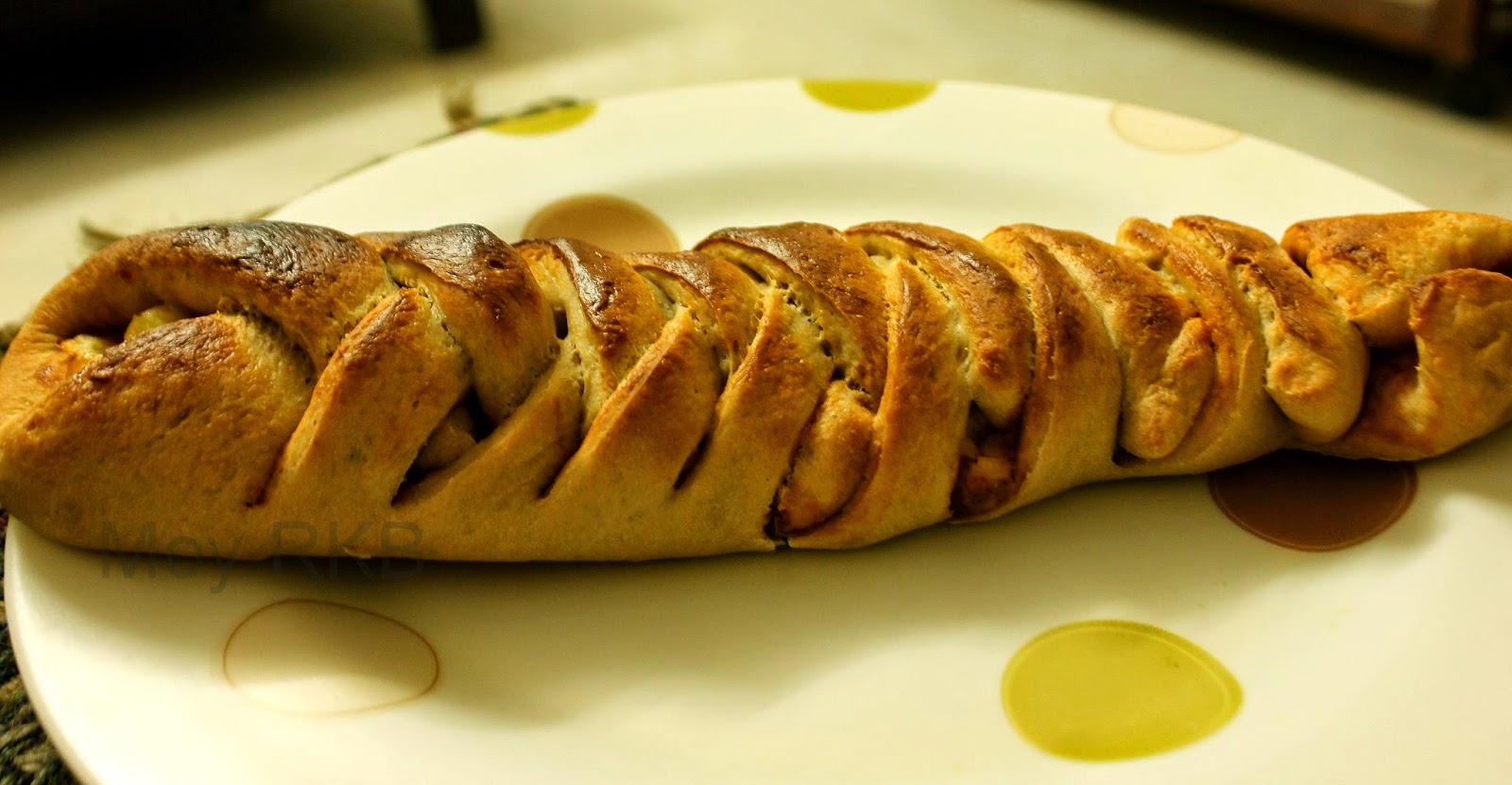 Pre heat the oven in 200 C for 20 minutes. Place the stromboli in the baking tray over a parchment / butter paper or a silver foil. Bake it for 20 minutes at 200 C. Take it from the oven and let it cool for 5 - 7 minutes before serving.


With my dough I managed 2 full sized strombolis and one small one. The whole house was smelling of freshly baked pizza and i was extremely excited with the result. When husband got home and on dinner table he saw these, he gaped at me with surprise and sheer disbelieve that I managed to bake strombolis at home.That was for him on his special day. That look on his face made all the effort worth. I feel more confident with the OTG now. Do try this out and share your feedback / suggestions.

It could have been a Saturday like any weekend when  husband has work and I spent the weekend home alone, doing nothing much but still be super busy in doing nothing! But yesterday was a different saturday. Though I get to know about few bloggers meet in the city, I never had the chance to attend one. But this one caught my attention. The event was Preview of a book called "The Bad Touch". Written by Payal Shah Karwa, The Bad Touch talks about the sensitive issue of Child Sex Abuse ( CSA) and tells the stories of survivors like Harish Iyer, Amrita Purkayastha, Anurag Kashyap and few others Divya ( alias)Lata(Alias) Nidhi ( Alias) and Mrunalini ( Alias). The book also shares some practical information and technical guidelines for parents sourced from the NGO Arpan . So I was there on a Saturday afternoon at Cafe Infinito, Bandra Kurla Complex looking forward to an interactive session with the author and fellow bloggers.


The event was moderated by Kiran Manral and in the discussion were Payal, the author, Harish Iyer, noted social activist and Puja Taparia, Founder and CEO of Arpan; who offers a helping hand to victims of CSA and is trying to create awareness towards the same.In attendance was a large group of bloggers from across Mumbai. The session was highly interactive and insightful.

Child Sex Abuse - is a very touching and a highly sensitive issue.The author spent almost 5 years in researching and preparing the stories for this book. This meant treading  on a very slippery path, as she had to deal with individuals who went through such harrowing experiences that one may not ever imagine. To ask them about those could lead to the opening of a flood gate which may threaten the present. For obvious reasons, many people did not want to share their real identity. There are others like Harish Iyer , Anurag Basu and Amrita Purkayastha who suffered but not only survived but thrived from their experiences. They are no more victims but they emerged victorious from the agony.

When asked why she decided to write a book on such a subject, Payal replied that she wanted to write about something which is socially relevant rather than fiction or romance. Harish Iyer was also her inspiration when she met him for the first time in 2006 in a Child Sex Abuse awareness programme and learnt about CSA and the man himself. In her own words  " I was looking to write a book about a real story which would add value to the society and millions around the world. Child Sex Abuse was an issue which was grossly being ignored by the Government,the Law and Society as a whole. I chose to write on CSA inspired by Harish Iyer and his story."

The stories in the Bad Touch shock and at times numb the reader. The book also tries to equip the guardians or parents with sufficient and necessary information to fight against this menace.
This is the time to talk,share and create awareness about CSA. Donot hesitate to point out if you think something is wrong in the relationship between a child and the care taker, be it a parent, grand parent, relatives and anyone around.Raise your voice. Educate your child or any child you know of about the good touch , the bad touch; the safe touch, the unsafe touch; the right touch, the wrong touch. Teach them to protest and thus protect themselves.