A Fragrance to remember

It was a sudden decision like many of our trips and we decided on Kochi; Fort Kochi to be precise. Kerala in Monsoon; officially "off season". Got out tickets booked, applied for a day's off and reached the airport. A quick search in the ever dependable tripadvisor showed so many options of bed and breakfast in Fort Kochi. We zeroed upon Walton's homestay. There was something about the place which clicked. Yes even in the small screen of the phone. P made a call to the place to check availability and also to ask was it ok if we took a pre paid taxi from airport to Fort Kochi. A very cordial but firm voice said, rooms were available and advised us to opt for the AC bus from Airport to Fort Kochi rather than paying Rs.800 to the taxi.The voice also informed that since he didn't have commission paying policy to autowalas and cabbies, they would not know his place. If you ask us honestly, that made us confident of our choice as it showed the owners faith on what he offers to his visitors.
We landed in Kochi at 1pm. There it was, the AC bus waiting to carry passengers to Fort Kochi through the city of Ernakulam. Fare - Rs.70 per head.The bus takes about an hour to reach Fort Kochi from Kochi International airport which is about 45 KM. The Bus dropped us at the Kochi bus stand which is merely 5minutes walking distance from Princess Street.It is on Princess Street, Walton's homestay is located.
At the reception we were greeted by the man behind the voice we spoke in the morning ; Mr. Walton himself. He assured us that he was giving us the best room. Out of the 9 rooms, only 2 - 3 rooms were occupied as it was not the Tourist season.We got a room on ground floor which opened directly to a very well kept garden. Because of the rains, everything around was green and fresh. We entered the room and a very striking and sweet aroma of Lemon grass welcomed us. It was such a pleasant surprise! In our previous experiences, we had been to Inn or hotel rooms with all sorts of smells; mostly the strong room freshner and sometimes even the damp smell of carpets and walls.The room's flooring was wooden and the house keeper informed that they used Lemon grass oil while mopping the floor to keep the mosquitoes at bay.The room was big, airy and very very well kept. We stayed there for 3 nights. Every day they would clean with the same oil.

The town of Fort Kochi was under Portuguese, Dutch and British rule in different points of time. The whole town still has the remnants all over. We decided to discover the city on foot.Heard that during tourist period, one can hire bicycles too. One day we went to see the Jew Town and Mattancherry palace. Mattancherry palace or the Dutch palace. The Dutch palace was originally built by the Portuguese and was gifted to ruler of Kerala. Later it fell into the hands of the Dutch and they revamped it. The walls inside the palace are adorned by some superb murals. in the Jew town, there is the Jewish Synagogue which is now considered to be the oldest among all the synagogues in the commonwealth of nations.


We never wanted to hurry and go everywhere the tourism brochure mentions just to strike off the place. We walked, sat in the cafes, sat by the beach,enjoyed the fishing sessions in the evenings and mornings. After 3 wonderful days, we took the bus to airport again.

It remains one of our memorable trips. That sweet aroma of Lemon grass still lingers whenever we remember this lovely little unplanned trip. Some memories are forever. This is one of them.

A host of fragrances

For the love of Food- Potluck at Prims

There is no sincerer love than the love of food..Said GB Shaw and I being a food lover, cant agree more. This love becomes even intense and interesting when you have like minded friends. For our love of food, we decided to meet for a Potluck lunch on a weekend. The potluck was planned a month ago. Only condition, everything has to be home cooked. A whatsapp group was created, date chosen,menu decided, venue fixed. We 4 girls were to meet at Prim's place at Wadala.

This year Mumbai Monsoon arrived a month late. Entire June went without rains and on almost everyday in July, it poured and poured. On the D day which was yesterday 12th July it was no different. To confess honestly looking at the non stop rains, for once I thought of ditching it. But then we all had decided a month ago, I was infact the initiator, how could I back out at the last moment! Not done and aren't I glad that I didnot do that.

The moment we entered Prim's home, the dining table was set for the grand spread. The mood for fun and food was set with this colorful table. 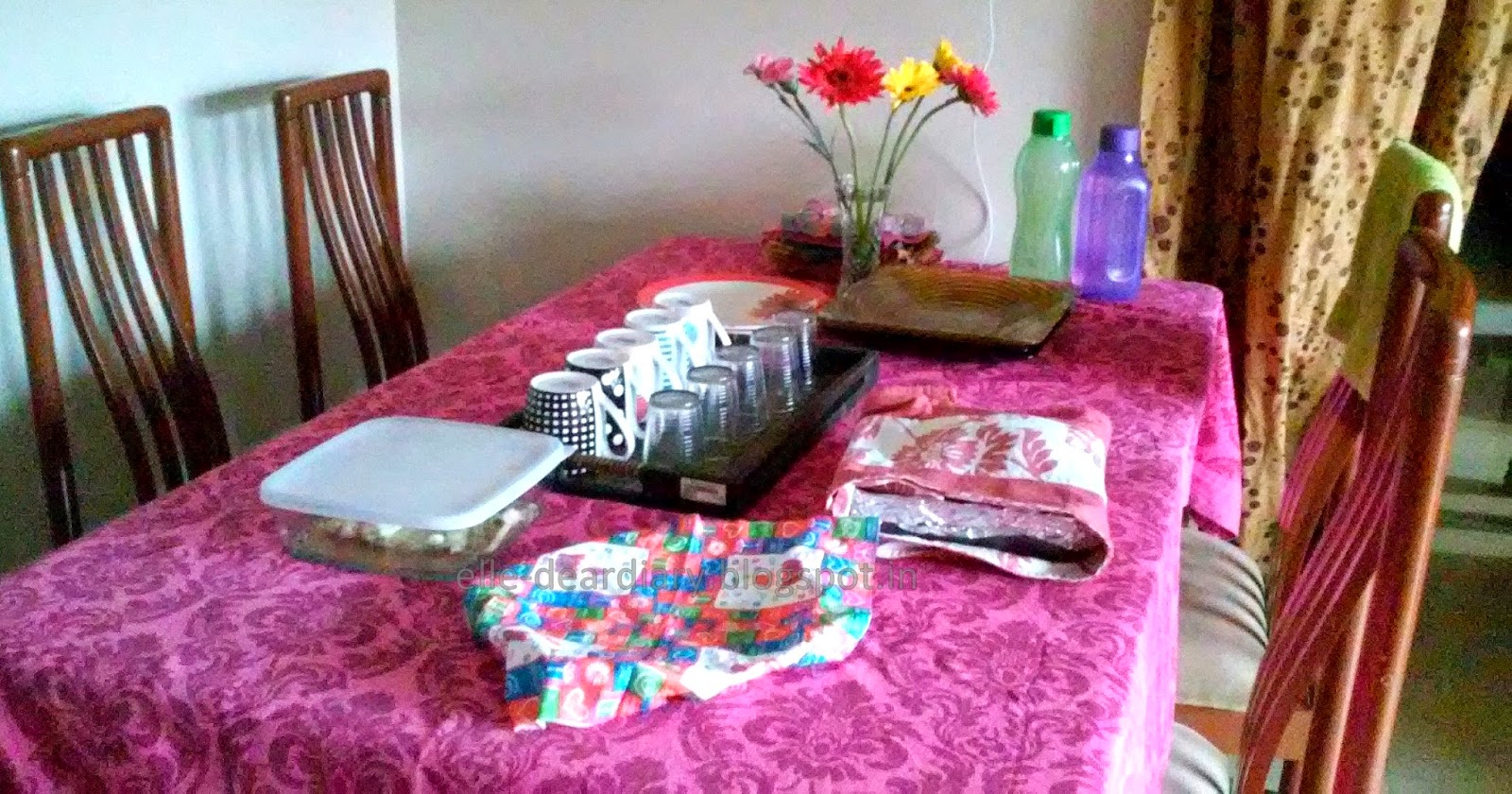 The menu was continental. Prim made the starter, Cream of Chicken and Mushroom soup. Shob made garlic bread. No she did not bake it. But to turn a regular brown bread to garlic bread, you need to work on that. She did and did that wonderfully.


With the rains pouring outside, we gorged on an awesome spread talking about a dozen things. The main course comprised of a whole chicken roasted and baked basa fish with potato wedges and sauteed beans. The roast chicken was by Gits who is a super duper food enthusiast and an upcoming chef who specialises in delicacies from North East India. The Roasted chicken with onions and herbs was the show stopper for sure.


By the time we finished gorging on the soup, garlic bread and the chicken we were full. So we took 15 minutes break before hitting the dining table for the fish. Yes, I prepared the fish. Its simple quick and easy. Fillet Basa in olive oil, garlic, salt, pepper and dill with a hint of butter. I used the oil only to grease the baking dish.


As per my regular weekend ritual, I even took a small afternoon siesta too. Come on, now this is one luxury people like me could afford only in weekends and holidays. It was time to wind up the fun get together. The gracious hostess made us Kashmiri Kahwas. Shob had got some brownies too. A fitting end to a wonderful Saturday potluck.

Food brings people closer and I so strongly believe that. Here's to many more get togethers; potlucks or otherwise....Cheers!